Explore Indochina in 2 weeks, why not?

Home » Explore Indochina in 2 weeks, why not?

Earlier this year, I had an interesting plan to travel around Indochina’s region, which includes Vietnam, Laos and Cambodia. I had such fascinating experiences that I decided to do it again with An, and that journey was a stepping stone for us to plan this itinerary which we are about to share with you today.

But first, let me rewind the time to January 2019 and briefly tell you my former plan.

I had never been to Laos before, and nothing can beat the hype of crossing one item of your bucket list in January when your resolution is still fresh and willpower strong. Therefore, I drafted a plan to take a night bus to Si Phan Don (also known as 4,000 Islands in Laos), before traveling down to Ban Lung (Cambodia) and crossing the border to Pleiku (Vietnam).

To spice things up, I only booked a one-way bus ticket from Saigon to Pakse and one-way flight ticket from Pleiku back to Saigon. Had I not made it to Pleiku on time, I would have spent my Tet Holiday (Vietnamese New Year) elsewhere, because all transportations simply stop or get fully booked during this period of time.

I almost could not find a bus back to Vietnam; however, this was absolutely an eye-opening experience for me, and as Tet drew near, I was also blessed to witness different genuine local activities to prepare for the most important festival in Vietnam.

Interested? I will have to tell this detailed story in another post. This trip gave me important insights to organize our journey 6 months later. 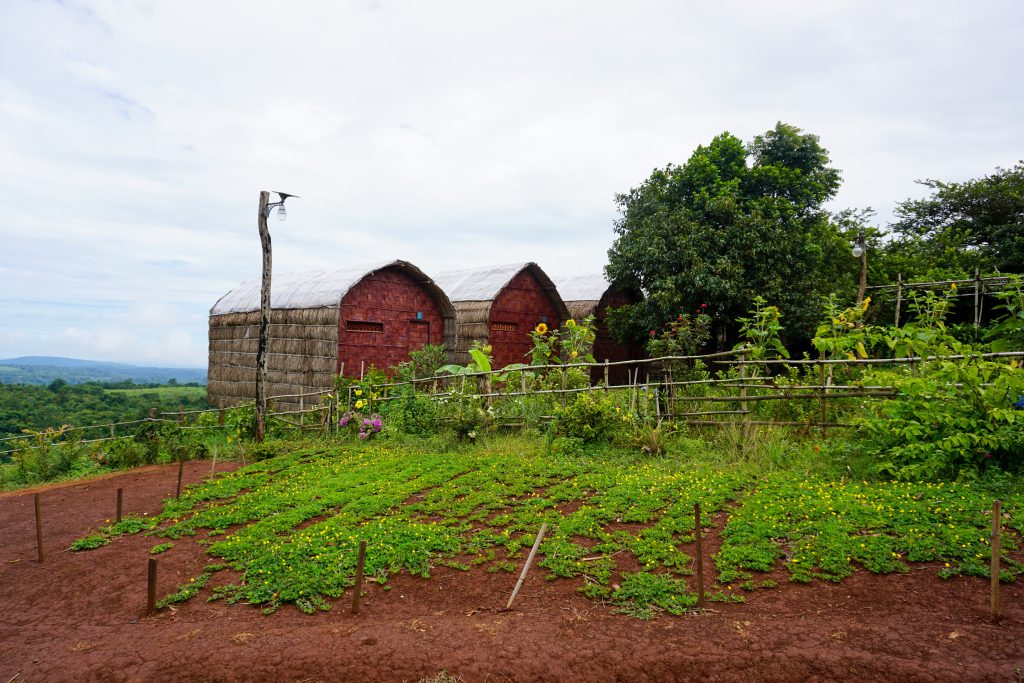 Julian was actually my code name for July’s traveling with An, and the itinerary happened to draw a loop starting and ending at Saigon.

At first, we wanted to make this loop a bit bigger by extending our trip to Vang Vieng and Luang Prabang; however, as we only had 2 weeks and already lost 3 days for our family trip in Mekong Delta, we improvised a new plan:

Since I had prior knowledge about Ban Lung and Pleiku from my previous trip, I knew exactly where to take An and shortened our travel time. However, we believed that you should spend more days in these locations, especially the awe-inspiring Pleiku. You may read about Pleiku HERE.

Since An preferred visiting native elephants to seeing Irrawaddy dolphins, Mondulkiri was our first stop.

Traveling from Saigon to Sen Monorom was never straightforward. Usually, people often went to Phnom Penh before catching a noon bus to Sen Monorom, and it would surely take time. I found an option to go straight to Sen Monorom via Snuol from some fragmented comments on the Internet, and we decided to take risk.

We got up at 5am to take a cab to Eastern Bus Station (Ben Xe Mien Dong) of Ho Chi Minh City. From there, we took a bus to Loc Ninh (Tay Ninh Province) where we crossed Xa Mat Border Gate to Cambodia. The bus departs every half an hour. You might get a ticket at Booth No.7 (looking for Thuan Thanh bus, or simply asking the seller for a bus to Loc Ninh). The ticket price was about 80,000 to 85,000 VND (~$4 per person). 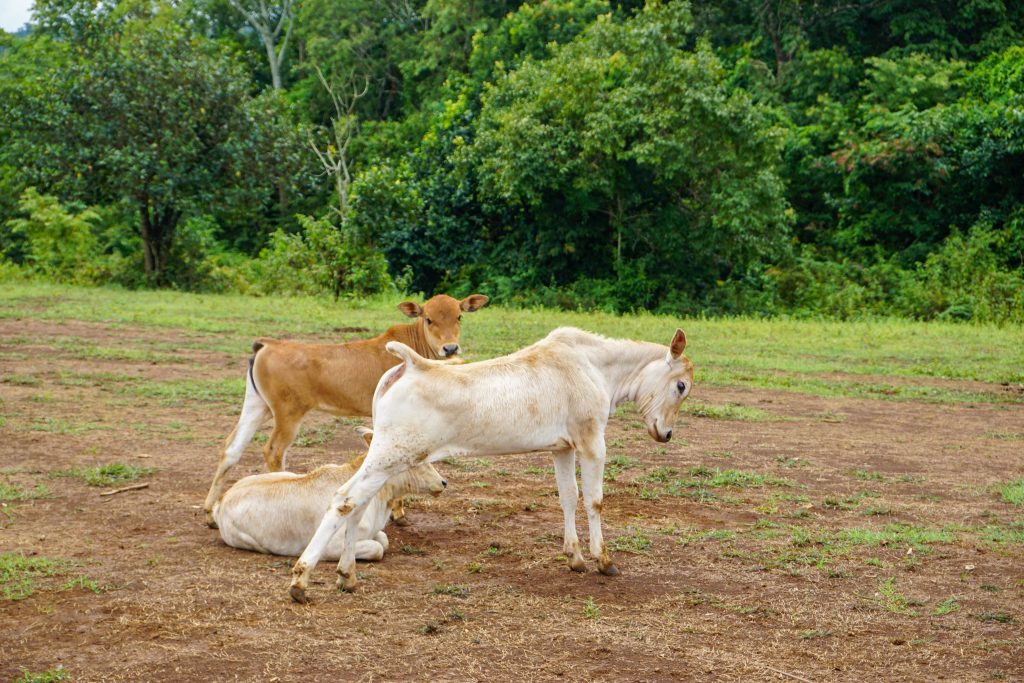 For a distance of only 123km, it took about 3 hours to arrive at Loc Ninh Bus Station, as the bus frequently stopped to pick up passengers. Once there, you might hop off to haggle a motorbike ride to the border gate, or you might request the bus driver to take you there. We did so at the cost of 100,000VND per person for this 15km journey. However, having a whole airy bus to ourselves, we believe it is worth every penny, and we do not think you may get the same motorbike ride at the same cost.  After getting our passports stamped, we walked out of the customs office and immediately got spotted by a tuktuk driver.

Even though he barely spoke English and my Khmer was a joke, we managed to get a joyful ride to Snuol at only 10 riel. What a steal considering how much fun we had!

We were dropped off at the center of Snuol (I guessed) where it looked like a small market with some food stalls and minivans heading to different places. The initial asking price to Sen Monorom was $10 per person, and we negotiated down to $7. We believed it was a fair price considering the “antique” condition of the minivan. However, the driver was skilful and we reached Sen Monorom in about 3 hours with a lot of sweat. Of course, the van did not have air-conditioners, but broken windows.

At first glance, Sen Monorom was a small town with a big square in the middle. We stayed at Tree Lodge Homestay where we could easily book for a trekking tour to visit protected elephants. Check out the Mondulkiri Sanctuary and its tours!

Walking from the bus station to the homestay is mere 2 km, and you will likely catch the breath-taking sunset view at the end of the steep road. 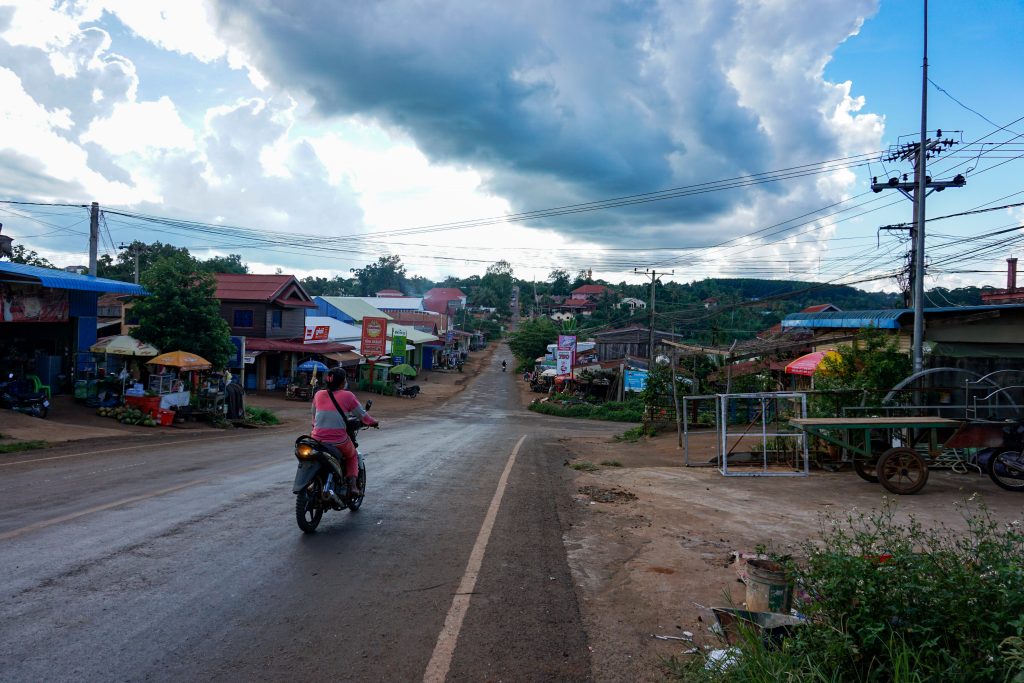 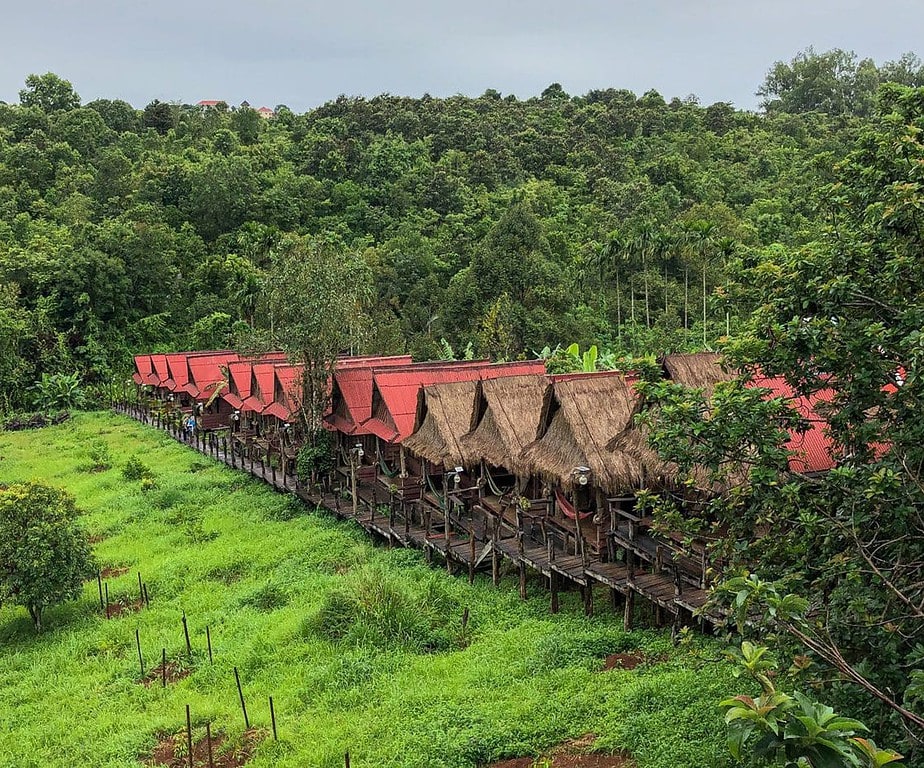 The homestay, which looks catchy on booking.com, is located on the hillside with elevated wooden bungalows. In addition, we partly came here due to some comments on pretty delicious foods. The bungalow possessed a feeling of adventure, with a hammock on our patio, a mosquito net, pebble tile shower floor … and some curious geckos. 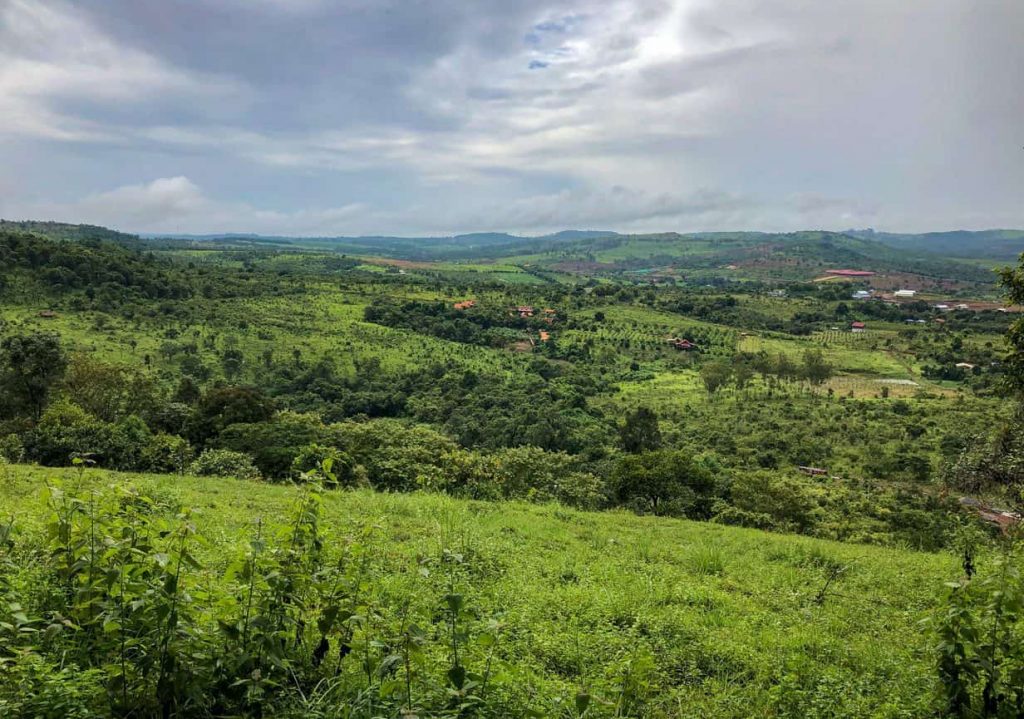 The town itself is kind of laid back with not so many activities. Travelers often come here for elephant and gibbon spotting tours in the nearby forest. Nevertheless, it is pretty fun to rent a motorcycle at the central market to explore Dohkrormom Mountain and nearby attractions. There, we found a wooden coffee house offering a lovely view to the mountaintops.

Transferring to our next destination was a breeze.  Our hosts at the Tree Lodge helped us reserve seats in a 2-hour express minivan to Ban Lung for $7/person, departing at 8am sharp. Luckily, the condition of this minivan was far better than that in Snuol.

Ban Lung is located at Ratanakiri Province, a stone’s throw away from Pleiku, Vietnam. This town is bigger than Sen Monorom with more attractions such as the crater lake Boeng Yaek Lom and many waterfalls (Kachang, Ka Tieng, Cha Ong to name a few).

In my previous trip to Ban Lung, I stumbled upon a food stall which sold tasty grilled meat with broken rice. Hence, when we first reached Ban Lung, I took An to try the dish, and more interestingly, the business was owned by a Vietnamese family. In Ratanakiri, there are a lot of Vietnamese families who have been here since the Vietnam War, forming a strong Vietnamese community. If you want to try the food, go here …. (show in the map)

Local people love to weave different folktales about the sacred lake Boeng Yaek Lom for decades. For us, it is best to visit this emerald-colored lake early  in the morning when the water looks the most tranquil, transparent, and a bit mythical.

Moreover, I had a mixed feeling about waterfalls. I personally found that the discovery journey was more thrilling than the falls themselves. Named as the land of red dust, Ban Lung would surely cover you with its color when you cross sandy hills to find those lurking waterfalls. However, please note that the best time to visit Ban Lung is from November to February when the rain has stopped and the dust has not yet become a nuisance.

My favorite thing to do in Ban Lung is to admire the sunset at Ban Lung Balcony while sipping Angkor beer. Fortunately, the hotel’s lakefront location offers a perfect twilight view. After feasting our eyes, we took a rented motorcycle to catch the evening breeze and fill our empty stomachs at Ban Lung Central Market. The specialty dishes here include not only boiled snails but also tasty grilled snake-head fishes. Try them!

In short, Pleiku is an underrated travel destination with cool highland weather topped with a sacred volcano and crater lake, while Quy Nhon features some beautiful beaches and vibrant community. When these two destinations offer you bipolar experiences, Phan Rang – Thap Cham do have both mountains and sea. We have already reviewed these places HERE.

Why should you try out this Julian’s loop?

For those who love to take a sneak peek into the lives of Indochina, this loop connects many unique travel experiences from forest trekking to ocean diving. We, at Two Nomads One World, have tried this idea twice and offered our own insights to help you plan your itinerary.

Since the connection between destinations is convenient, you do not have to book your tickets so ahead and can flexibly adjust your plan without much hassles. In addition, we have an expansion plan of this Julian’s loop HERE where you may also visit Laos.